You’ve probably noticed we’ve been featuring monthly familiarization (FAM) reports, created by our amazing certified graduates. This is because learning from—and sharing with—each other is what we do best!

This month’s report is by Cindy Blanchard, CTA, of ATouristLife Travel. And, as she says, amazing art, architecture, and food await your clients in Greece! Here are some tips from Cindy’s recent trip to Greece:

Our flight with Emirates was surprisingly relaxing even though extremely long. The Athens airport is very nice and easy to navigate. Almost everyone spoke English, and our driver was waiting for us.

Many of the five million Athens residents use the subway systems. If you are staying only within the city itself, I would not recommend renting a car but taking subways instead.

We stayed at the Hotel Divanni Acropolis. With a 10-minute walk to many of the sites, it was a centralized location. On our drive to the hotel from the airport—about 45 minutes—we were able to see many of the ruins, including Hadrian’s arch.

A spectacular sight visible from most of the town center is the Acropolis where you also will find the Parthenon, the Royal Palace, Temple of Zeus, and the Agoura. This spectacular treasure is especially beautiful lit up in the evening atop the hill. 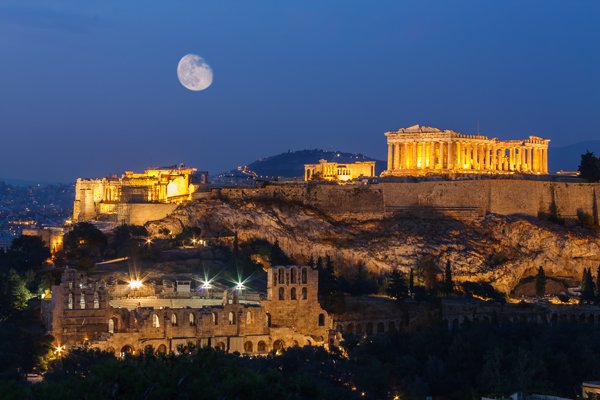 The Acropolis Museum, also located downtown, has a vast collection of important antiquities. Plaka is a very historic old section of the town where you will find many restaurants and lots of shopping.

We took a nice ride along the coast, passing beautiful villas and beaches on the way to Cape Sounion and The Temple of Poseidon, which is 70 km south of Athens and sits upon a cliff above the Aegean Sea.

We then left the city and headed out to The Peloponnesian Peninsula. Here we saw the Corinth Canal and Ruins of the Temple of Apollo. We stayed at The Amalia Hotel Nafplio, a nice hotel with some sophistication mixed with rustic charm and the most beautiful sunsets. Mycenae was our next stop, where we visited the Beehive Tombs and The Lion’s Gate. 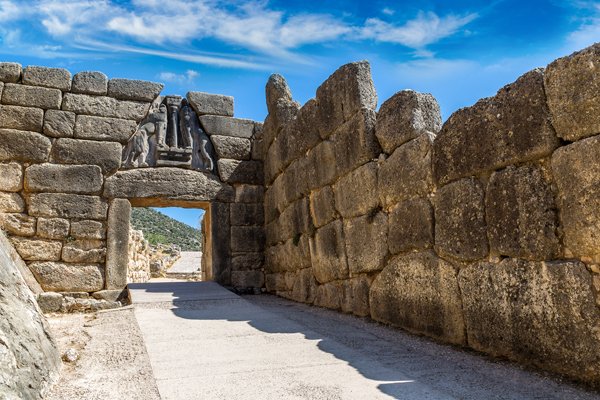 The mountains became more prevalent then, and the olive farms felt endless. Ancient Olympia— where the First Olympic Games were held—was next on our list. We were able to see the Temples of Zeus and Hera. We stayed at The Arty Grand Hotel and joined a local olive farm family for dinner and education on olive farming and olive oil.

The following night, we headed to Delphi and spent the evening at The Hotel Amalia Delphi, high in the mountains. This hotel was part modern and part rustic with spectacular views. We walked down the hill to a village for dinner. We also walked the path to the 4th-century Temple of Apollo, where one goes to consult The Oracle. 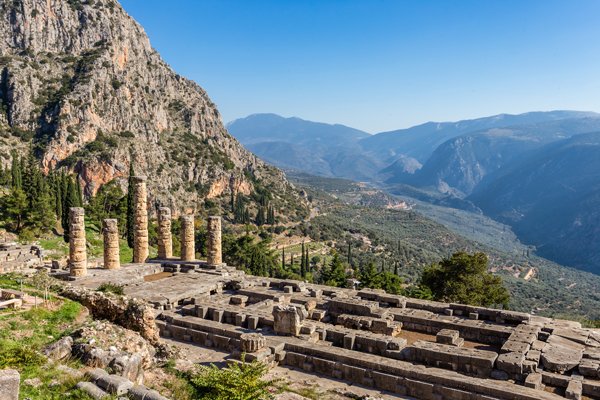 We visited Meteora and two of the six Eastern Orthodox monasteries. If time allows, I recommend your clients stay in the area more than one day in case the weather is uncooperative. The day we arrived was rainy and cloudy. What should have been spectacular views, instead were limited. I was able to purchase books at the monasteries with photos of the exquisite paintings because photography in the chapels is prohibited.

The drive up to the location was slow and steep. Before the roads were built, the Monks were loaded in a basket and hoisted up the side of the cliff by a pulley system.

Eventually, we retraced our trip to Athens. Travel through the countryside is well marked with signs also in English. All the quick stops we made along the way had at least a few English-speaking staff, and everyone was friendly.

In Athens, we went to the port and took a day cruise to Poros and Aegina. We were supposed to dock in Hydra, but it was too rough to dock. This day cruise is a nice trip that includes a buffet lunch on the ship. Be aware that, when stopping at all three islands, the time typically is limited to fewer than two hours per island.

My target audience for Greece is anyone who is mobile. Families or individuals can enjoy the countryside, but it is a destination that involves walking and climbing. That said, anyone who loves art, architecture, history, or mythology must visit Greece. As someone who loves mythology and art, I can tell you there is no wrong place to visit! The number of ruins is endless, and exploration and excavation continue throughout the country.

This was an eight-day trip. To see as much as possible on a short trip, I recommend a tour group. A guided tour is a great way to see as much as possible in a short time because the itinerary is set, and you have priority entry to museums, etc. An FIT package can be air, land, excursions, and transfers. This involves more planning and knowledge of the traveler and the destination, so it generally is more expensive.

As for the food, I don’t think there is a bad place to eat. For example, in Psiri—an area full of little places to eat, just outside of Athens—the food was served Meze’ Style with big platters of food in courses everyone shares. A typical Greek meal usually consists of Greek salad and Filo dough with spinach and cheese in many different forms.

One last tip for visiting the Parthenon or any of the ruins throughout the country: the earlier you arrive the better. The summer months can be very busy, and the sun is hot. Be sure to have a hat, water, and plenty of sunscreen. I prefer sending clients in the spring or fall.

To learn more about Greece and other destinations worldwide, subscribe to our Premium Access Membership. Becoming a member has many benefits, including FREE access to all of our Niche and Destination Specialist courses! For full details, click here.